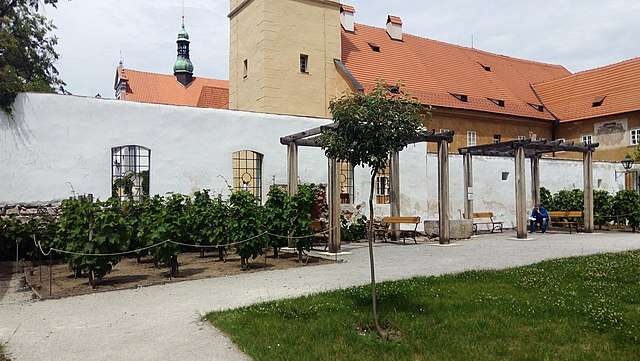 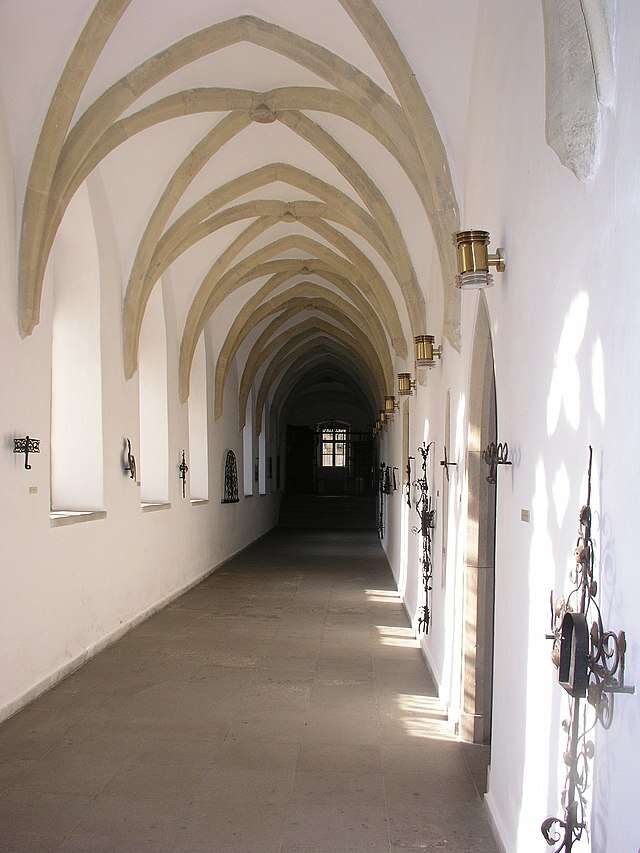 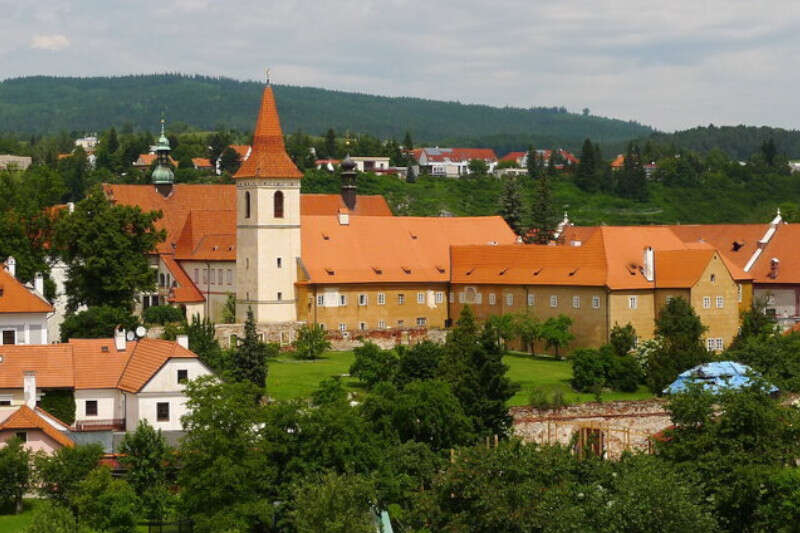 The Minorite monastery in Český Krumlov, called the Monastery of the Order of the Crusaders with the Red Star, was founded in 1350 by Peter I of Rožmberk and his wife Catherine as a joint monastery of Minorities and Poor Clares with a common church. From the end of the 14th century, the complex also included a house for pious lay women, the so-called beginas. The residence of the Poor Clares was ended by the reforms of Emperor Joseph II in 1785, but the Minorities remained in the monastery until 1950. After that the monastery premises were used for secular purposes. As far as the convent of the Clerics is concerned, this state of affairs continues to this day while the remaining part of the premises was acquired by the Order of the Crusaders with the Red Star.

The monastery area is entered through a gate with the Crusader coat of arms, behind which there is a small park called Tramín. The interior of the church is a unique gallery of Baroque religious art.

The interior of the church is a unique gallery of Baroque religious art. The main altar was commissioned by Prince Johann Christian von Eggenberg and his wife Eleonora in 1679-82. Their joint coat of arms is placed in the central part of the altar. The altarpiece by Matthias Leithner depicts the Virgin Mary with Christ and St. Francis and the painting on the superstructure depicts God the Father bestowing his blessing. The early Renaissance architecture of the altar is complemented by sculptures by the Eggenberg sculptor Jan Worath. On the lower floor from the left are St. Peter, St. Francis, St. Anthony of Padua, St. Paul and above them St. Ambrosius with St. Augustine. The altar is topped by a statue of the Archangel Michael with the devil prostrate at his feet.

History of the building

Construction of the monastery began after its foundation exactly in the middle of the 14th century and proceeded very slowly. The temple was probably built as early as the 14th century but the monastery of monks was probably not completed until a century and a half later towards the end of the 15th century. In the second half of the 14th century it was here that the tradition of displaying relics in Český Krumlov began. In 1668 the monastery was partially damaged by fire and afterwards it was undergoing construction work. These were carried out by the builder Jakub Maggi and lasted until the end of the 17th century.  In 1688 the Chapel of Our Lady of Ensiedel was built in the Paradise Court.

Since the foundation of the monastery there was a cemetery in the grounds of the Tramin where burials were made until the 17th century. There was also a mortuary which was destroyed in the 19th century.

The Český Krumlov State Castle is the second largest castle and castle complex in the Czech Republic and is also one of the most important monuments in Central Europe.The castle grounds are one of the ...

The castle tower is a small castle in the Czech Republic, which is also called Český Krumlov. In Český Krumlov it is known as the northern bastion and the witch's tower. The Nazis also used it as a pr ...

For more than 150 years, the building's foundation was mistakenly associated with a document from 1309, which also dates the construction of the Golden Crown Monastery, and Krumlov was probably first ...

The Latran houses are part of the historical centre of Krumlov. They were built in the Gothic period and still belong to the cultural heritage of the town and the region.The word latrán comes from Lat ...

The first references to the Cloak Bridge date back to the 15th century. At that time it was probably only a wooden drawbridge. It is popular not only with tourists, but unfortunately also with suicide ...

The building is located in the city district of Latran, on the left side of the Vltava River and is a UNESCO World Heritage Site. It currently has three floors, and was rebuilt at the end of the 18th ...